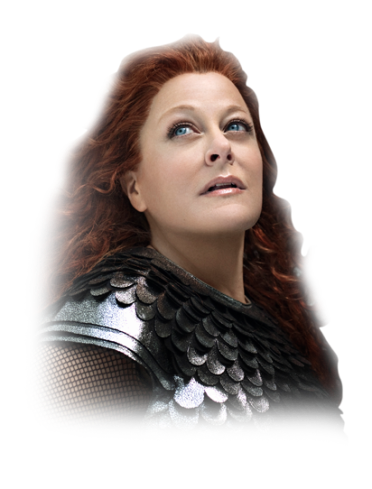 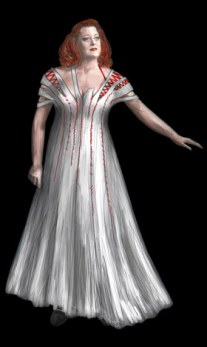 What are the missing characters?

1 ____________ is a Nibelung, a member of a race of dwarves who live underground. He steals the Rhine gold and forswears love in order to forge it into the all-powerful ring. He enslaves the Nibelung race while he is in possession of the ring and curses it when it is wrested from his hand by Wotan.

2 _____________ is one of the nine Valkyries and Wotan’s favorite daughter. Against her father’s orders, she fights for Siegmund in his duel with Hunding and as punishment is stripped of her divinity. As a mortal woman, she becomes Siegfried’s bride. Ultimately, she throws herself into Siegfried’s funeral pyre, and through her self-sacrifice redeems the world from the curse of the ring.

3 ____________ is the god of thunder, brother to Freia. He attempts to fight the giants to save Freia from being used as payment for Valhalla.

4 __________ is the all-knowing goddess of the earth and mother to Brünnhilde and her Valkyrie sisters. She warns Wotan of the danger of keeping the ring and appears sporadically to remind him of the cosmic implications of his decisions. 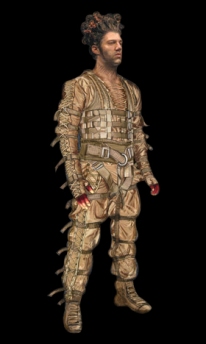 5 __________ the giant built Valhalla for the gods, along with his brother Fasolt. He kills his brother in a fight over the ring and uses the Tarnhelm to transform into a dragon. While a dragon, he guards the ring and is finally slain by Siegfried.

6 __________ is a giant who, along with his brother Fafner, built the fortress Valhalla, the home of the gods. When they claim the ring as their reward, Fasolt is the first victim of its curse when his brother kills him over the division of the treasure.

7 __________ is the goddess of youth and beauty. She is responsible for tending the golden apples that give the gods their immortality. Wotan promises her as payment to the giants for building Valhalla, but instead they offer to pay the giants with the Nibelungs’ treasure.

8 _________ is Wotan’s wife and the goddess of marriage. It is her duty to protect the laws of marriage, despite the fact that her husband is frequently unfaithful. She demands that Wotan uphold his obligation to protect family and marriage vows.

9 _________ is the god of springtime and brother to Freia, Donner and Fricka. He attempts to fight the giants to save Freia from being used as payment for Valhalla. He creates the rainbow bridge so the gods can enter Valhalla.

10 ________ is the ruler of the Gibichungs, a mighty clan living by the Rhine river. He swears to be Siegfried’s blood brother but is eventually persuaded by his half-brother Hagen to join in the plot to kill him. He has a sister, Gutrune.

11 _________ becomes Siegfried’s bride after he is given a potion that makes him forget Brünnhilde, his true wife. She is the sister of Gunther, ruler of the Gibichungs, and the half-sister of Hagen.

12 ________ is the son of the Nibelung Alberich and the Gibichung woman Grimhild, making him Gunther and Gutrune’s half-brother. Urged by his father, Hagen’s goal is to win back the ring, resulting in the plot to kill Siegfried. Hagen is drowned in the Rhine when he tries to take the ring from the Rhinemaidens.

13 ________ is a clan leader and the husband of Sieglinde. With Wotan’s help, he defeats and kills Siegmund in a duel, but is himself killed immediately afterwards by the devastated Wotan.

14 ______ is a demigod of fire and trickery, who operates on the border between the gods and mortals. He is Wotan’s most trusted advisor, despite the reservations of Fricka and the other gods. He lights the magical fire which guards Brünnhilde in her sleep.

Once his brother Alberich forges the ring from the Rhine gold, 15 ________ is forced into forging the tarnhelm—the magical helmet which will transform its wearer into any shape desired. He will later raise Siegfried from infancy and attempt to betray him once Siegfried forges the sword Nothung.

The three 16 ________ are female deities and weavers of fate for both the gods and humans. They gather beside Brünnhilde’s rock, weaving the rope of Destiny. They sing of the past and present, but when they speak of the ring and its curse, the rope breaks and their powers are lost. 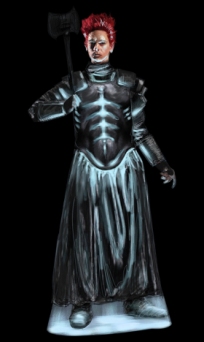 The 17 ________ are three water nymphs who guard the Rhine gold. Their names are Woglinde, Wellgunde, and Flosshilde. Alberich first pursues them in lust, and when they mock him, he steals the gold from them.

18 ________ is the son of the Wälsung twins Siegmund and Sieglinde, and the greatest hero of his time. Brought up as an orphan by the dwarf Mime, he wins the Nibelungs’ treasure and the ring by killing the dragon Fafner. He wakes Brünnhilde and claims her as his bride, but is later tricked into betraying her and killed by Hagen.

19 _________ is the human daughter of Wotan and an unnamed woman. She is the twin sister of Siegmund, though both of them are unaware of the fact when they meet and fall in love. After Siegmund’s death, Brünnhilde tells her she is pregnant with Siegfried, and she escapes to the forest to have the baby, but later dies in childbirth.

Wotan fathered 20 __________ and his twin sister Sieglinde in an attempt to create a free hero who could win back the ring. The twins are unaware of the other’s existence, and when they finally meet, fall instantly and unknowingly in love. The twins, known as the Wälsungs, are the parents of Siegfried. Siegmund is killed in a duel with Sieglinde’s husband Hunding. 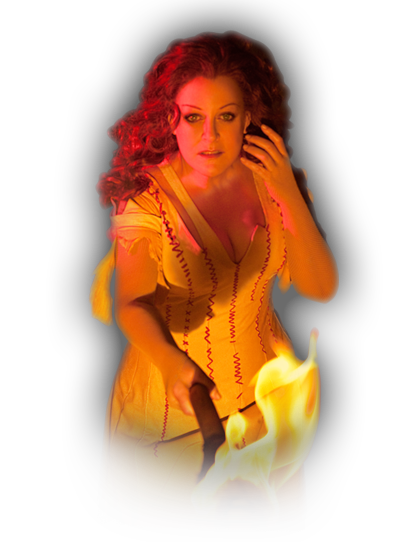 The nine 21 ___________ (Brünnhilde, Gerhilde, Grimgerde, Helmwige, Ortlinde, Rossweisse, Schwertleite, Siegrune, Waltraute) are immortal warrior maidens, daughters of Wotan and Erda. Their task is to bring the most valiant heroes who have fallen in battle to Valhalla, the castle of the gods, where Wotan is gathering an army to win back the ring. The two most prominent among them are Brünnhilde and Waltraute.

One of the nine Valkyries, 22 __________ secretly visits her sister Brünnhilde in her mountaintop exile in an attempt to persuade her to give the ring back to the Rhinemaidens.

23 ________ is the chief god and defender of laws and honour. After being forced to give up the stolen ring to the giants as a payment for Valhalla, he seeks to find a hero free from the gods’ influence to save them from ruin. As an observer of the action in Siegfried, he is known as the Wanderer.

la vida com a pretext per anar a l'òpera

Too Fat to Cook
Relatero